On Wednesday 8th December, Trixie Trishaw, in full festive attire, was at Ropner Park as part of the Stockton Communities Christmas celebrations which saw approximately 70 local school children performing an arrangement of Christmas carols accompanied by the one and only Mike McGrother.

The event, supported by Stockton Borough Council, was very well attended by the general public and the children appeared to have a fantastic time singing along with the frontman of The Wildcats of Kilkenny, who was playing along on the acoustic guitar.

Having arrived early, Trixie was able to take long time supporter and wife of local councillor, Laraine Perry, for a quick loop around the upper level of the park before spotting the distant arrival of the school children marching in together. Trixie then remained out of sight of the children until the big reveal – delivering the very naughty Elf on the Shelf during their rendition of We Wish You A Merry Christmas so that the Elf could dance along and get up to typical elfish antics.

We would like to thank everyone who took a moment out of their day to say hello and ask about the project. We have a few more social appearances over the festive period and look forward to seeing you again very soon! 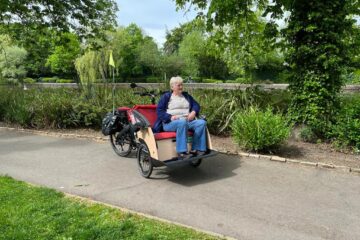 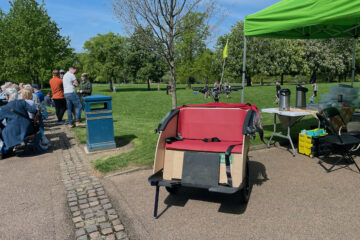 On Sunday 8th May, Alison and Caroline from Hand In Hand Activities CIC attended the Spring Fair at Ropner Park in Hartburn to take attendees for trishaw rides around the park on Trixie Trishaw.

Today, we had the absolute pleasure of taking Trixie Trishaw on a visit to Elton Hall Care Home to meet some members of the team and to take a few residents for a short trishaw ride around the local area.