Ropner Park, thanks to support from Stockton Borough Council and Friends of Ropner Park and with funding from the National Lottery’s Celebrate 25 Fund, which we were awarded in 2020 prior to the COVID19 pandemic.

The event offered free 10 minute rides around the Park, free refreshments (including sandwiches, wraps and fruit donated by Morrisons, Teesside Park) and a chance to socialise with peers in a public space, and brought together such a diverse group of people from the local and wider community.

Arriving in the Park early to get set up, we commandeered a picnic table close the the Cafe so that we could secure our pop up banners and store our box full of promotional and cleaning materials, as well as be close enough to the cafe for purchasing the refreshments.

Caroline was in charge of greeting people and organising refreshments, while Alison and Robert shared piloting, the post-ride antibacterial clean down and supporting people on and off the trishaw.

Prior to the launch, the public were able to pre-book a specified ride time but where no rides were booked we were able to take people who were visiting the park out for a ride too.

“It was a heartwarming experience taking people I knew and people I had only just met around the park. I was able to assist one park visitor in visiting a memorial tree planted in memory of a friend and other passengers enjoyed the views of the children playing, the colourful flower beds and the ducks by the pond. There was a real sense of bringing the community together and I don’t think I’ve ever spoken to so many people in such a short space of time. One passenger told me how she regularly walks her dog but doesn’t always speak to people but while on the Trishaw the number of people who said hello, smiled and waved was easily in double figures”, Alison Watson-Shields, CWA Pilot and HIHA CIC Director.

Robert Watson, who is the Project Lead added, “What a fantastic day in Ropner Park! It feels so good to finally have the launch of Cycling Without Age in Stockton. The weather has been perfect and we had so many people taking the opportunity to be a passenger on Trixie. While out on rides, members of the public were asking about Trixie and there was great interest in the project, with many enquiring about booking rides in the future.

Trixie was never stood still for long before we were on the move again with new passengers – younger and older people all coming together for a quick spin around the Park. Some of the older passengers were sharing stories of how they played in the park when they were children, how the park had changed over the years and how being on the trishaw helped to revive memories of listening to bands performing on the bandstand or fishing in the duck pond while they were with out their parents.

While riding around the park, people would stop you to chat with the passengers, wave and smile. Some passengers were demonstrating the ‘royal wave’ to passers by.

During one ride, a young lady shared a story of how when she was a child she rode a bike around the park. One day, she lost control of her bike while riding on the path down towards the duck pond. She subsequently fell into the duck pond and all her parents could do was laugh while fishing her out. That is exactly what Cycling Without Age is about – sharing stories, reminiscing and meeting people from your local area.”

All passengers were given a Polaroid picture of them sat on Trixie Trishaw as a take away to remember their day. One young boy was particularly impressed by the magic picture that slowly appeared as if by magic, while some older passengers didn’t realise Polaroid cameras still existed.

We would like to thank everyone who trusted us to take you safely around the park on Trixie, everyone who took time out of their day to speak to us about the project, everyone who acknowledged the passengers as we passed by on Trixie. We would also like to thank and acknowledge the support of the following local Councillors; Cllr Maurice Perry of Fairfield ward, Cllr Carol Clark of Grangefield ward and Cllr Lynn Hall of the Hartburn ward. We hope that together we can do some amazing work to improve the quality of life and social engagement of some of the most isolated people in the Borough.

Follow the development of the project on various social media channels by searching for CWAStockton. 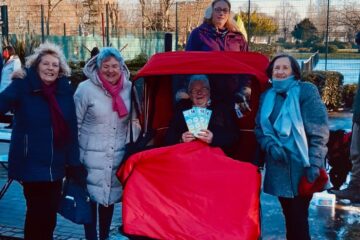 The smiles on their faces when they returned said it all, even though it was snowing!